One morning, the director of the Brooklyn Museum called Chargeurs’ Chairman and Chief of Executive Office, saying: “I have a quick question that is likely impossible but I just have to ask”. Indeed, the idea was unusual: to create a mural fresco by photographer JR, one of the most famous French artists, made from eco-responsible products, respecting the high definition of the original picture.

Chargeurs mobilized the knowhow of Senfa, its subsidiary based in Alsace in France specialized in functionalized textiles. Immediately, its team pay tribute to the French artist whose career has spanned 20 years. The fresco was designed based on the Domino product, a totally opaque material that can be printed on the textile side for visual communication purposes and is particularly well suited to black and white printing (hence the name “Domino”). This huge 16-metre high fresco is on view in the park that bears the same name as the product used by Senfa: Domino Park in Williamsburg, New York. Then, teams from Leach, the other subsidiary of the Group based in the UK, came to New York and set up the canvas in only 4 days.

This black and white mural is JR’s largest public project to date in this city. Overlooking the East River, it reproduces images of more than 1,000 of the city’s residents. From Paris to New York, Chargeurs employees are always available around the clock to support the inspiring projects of partners that shape the world.

The Chronicles of New York is now up inside the public Domino’s Park in Brooklyn! Use the app to listen to the stories of the New Yorker by pointing your phone at the mural ! Merci @brooklynmuseum, @lot_ek and Domino Park ! 📸 @marc 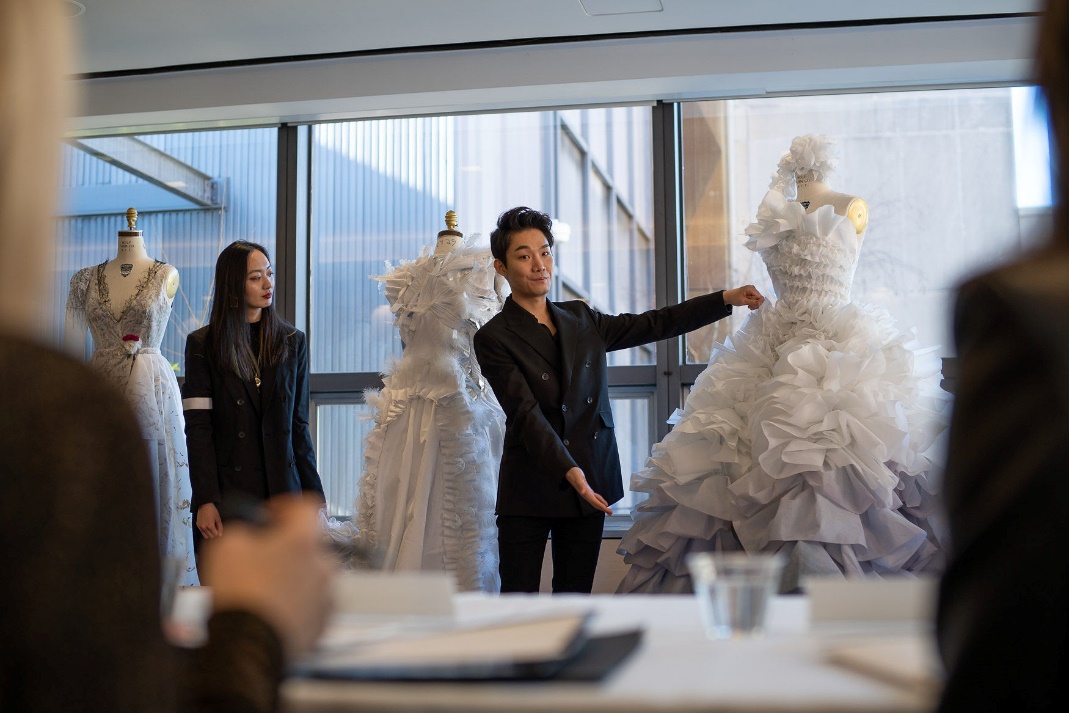 “Educating and supporting the next generation of fashion industry leaders is core to Chargeurs’ mission,” said Angela Chan. “We are very proud to sponsor this contest and we congratulate the winners and all the competitors whose designs showcase the crucial role that sustainable interlinings play in the shape, structure and beauty of garments. My fellow judges and I were honored to participate and thrilled to see these students demonstrate such creativity, skill and achievement.”

Students participating in the contest were required to create a wearable bridal garment utilizing 95% interlining materials, fusibles and/or chest pieces as the chief fabrication of the design. Interlinings are usually hidden in clothing, but the FIT contest showcased them by requiring the student designers to create their gowns almost exclusively from the products. Chargeurs supplied all interlining materials, which included products from its recently launched Sustainable 50 collection. The wedding gown designs were judged on design and aesthetics, usage of interlinings, creativity, technicality, and fit.